Millage renewal on the ballot for Bridgman Schools 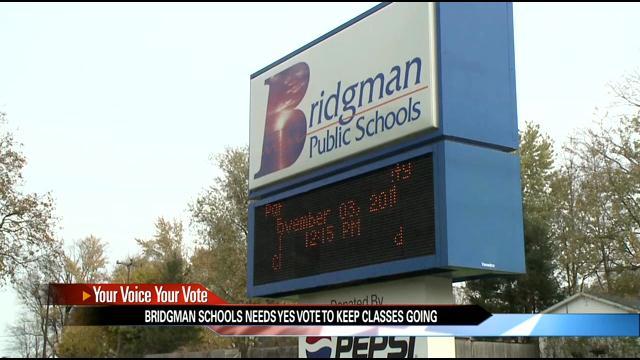 A millage renewal for Bridgman Public Schools would tax $8.38 on every $1,000 for non-homestead property owners. On Tuesday this proposal will be on the ballot.

The superintendent of Bridgman Schools said this is not a tax increase.

Shane Peters said, “It generates about $8.2 million and at this point that is 87-percent of our total budget.”

This renewal passed overwhelmingly in 2013.

Peters said, “We receive more money from our tax base than the state government would give us in per-pupil funding  so the state won't make up any difference for us. If our non-homestead does not pass! So that's why it's extremely important.”

One voter said his he voted against it because it's just too much money.

Ken Baker said, “Instead of asking for millage why don't you figure out how to do the job within what you have?”

Baker said his wife voted for the renewal.

At Eric's Bridgman Café they laughed as they realized their votes cancelled each other out.

Baker said, “A few years back they got a millage to improve the facilities and the first thing they did was pave the roads.”

A local business owner said he supports the millage.

Andrew Babcock said, “The better the schools, the better Bridgman will be in the long run.”

Babcock said he has a lot of pride in their school system, and he is happy to pay the 8.38 mill.

Babcock said, “I'm happy to! We have four kids in the schools. The better the schools are, the happier we're going to be.”
Share this article: