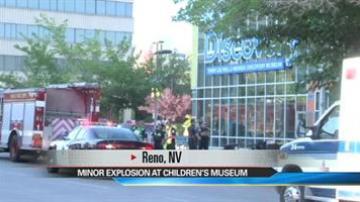 RENO, Nev. -- Something went wrong with an experiment at a Nevada children's museum and it set off a minor explosion.

Officials say something went wrong with a smoke tornado demonstration. It caused a small explosion and 7 children and 2 adults were injured.

Officials say they suffered minor to moderate burns, mostly to their hands, arms and faces.

Four others were hurt, but were treated at the scene.