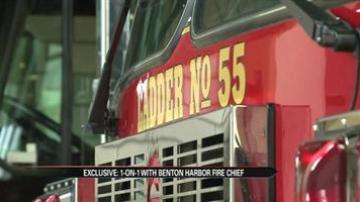 The investigation started after one of the department’s firefighters got trapped inside of a burning house last March.

Jeremy Connell, Deputy Director of the Benton Harbor Fire Services talked exclusively with ABC 57 about the changes that came about as a result of the investigation.

"The public should feel a lot more safe now. We do as responders," Connell explained. "We’re new to this whole public safety program, so we’re developing a whole new culture, but the MIOSHA investigation has accelerated that process."

In July MIOSHA hit the city of Benton Harbor with $10,000 in fines. The public safety department was fined because of  procedures that were not followed properly, one of them being the two in, two out rule.

The city and MIOSHA made a deal.

"We were able to cut our fines in half.  We paid $5,000 in fines instead of $10,000. With the money we saved we were able to spend that extra money where it made a difference." said Connell.

And the difference is obvious, Connell says officers have improved their response times by two minutes, and he says there will always be at least two in, and two out.

"We always have at least four people on duty that can fight fires, and we can call more people in as needed."

Between paid on-call officers, and agreements with nearby fire departments, Connell says there are over 30 trained fire officials that can be called in at anytime.

"Our top priority is responder and public safety, we’re going to continue to strive for excellence."