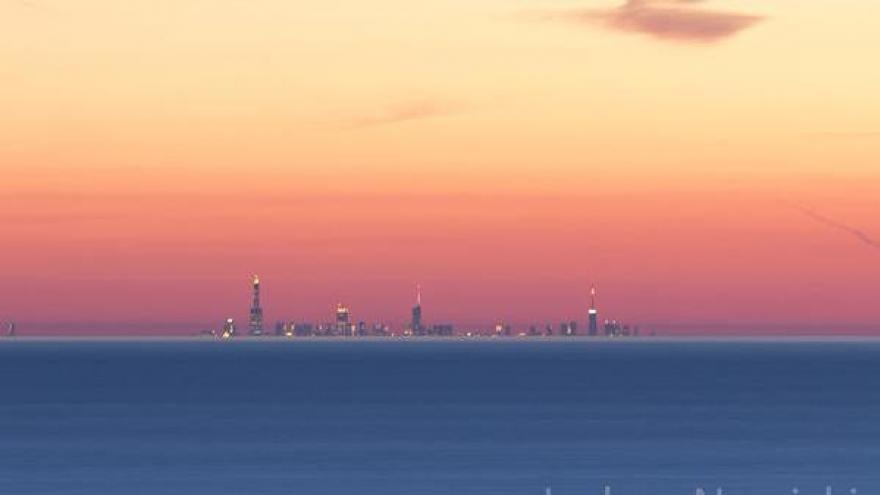 A picture of the Chicago skyline taken almost 60 miles away, is actually a mirage. Joshua Nowicki (@StartVisiting) snapped the pic Tuesday night from Grand Mere State Park in Stevensville. Under normal conditions, even when extremely clear, this should not be visible, due to the curvature of the earth. The Chicago skyline is physically below the horizon form that vantage point, but the image of the skyline can be seen above it.

This is a form of Superior Mirage, superior in this meaning the mirage or image of the skyline is seen above where it's actually located. The clear skies, and cool weather (aided even more by the cool lake water) creates an inversion. A layer of air near the surface that's cooler than air higher in the atmosphere. This creates a bending or ducting effect where the light (image) instead of going in a normal straight line into space, curves back towards the surface of the earth.

This same phenomena can also be seen on the radar in the form of "ground clutter" the inversion is taking the radar beam (light) and bending back towards the surface of the earth, creating a "ring" effect.

UPDATE: We went back to the dunes in April of 2016 with photographer Joshua Nowicki and saw similar phenomena. We explain the science of atmospheric refraction ( mirage and looming) Watch our Emmy nominated piece Skyline Skepticism here.