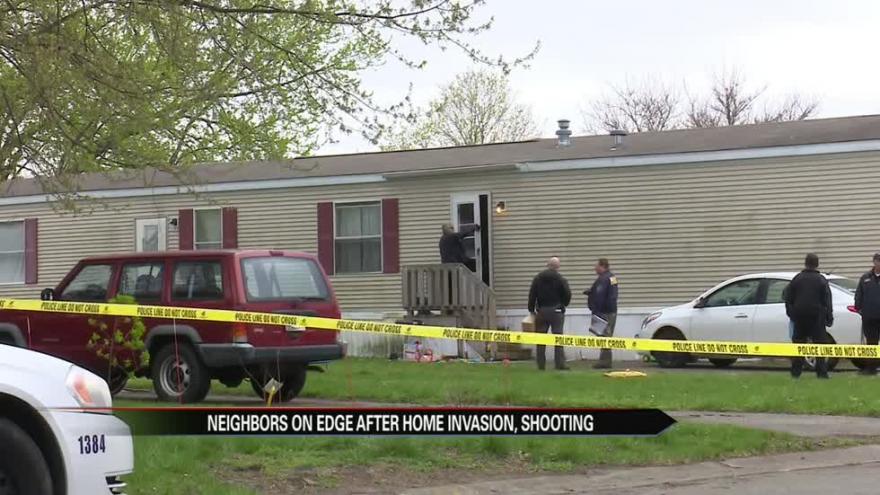 MISHAWAKA, Ind.-- New details in the case of the Mishawaka man who was shot during a home invasion.

It was just after 1:30 in the afternoon Tuesday, that authorities responded to a report of a home invasion to a home in the 1400 block of Burnham Drive in the Village Green mobile home park in Mishawaka..

The victims family confirms 27-year-old Chad Halliburton was shot in the ear and remains hospitalized.

“It doesn’t surprise me any with the area that we live in," said Village Green Mobile home park resident, Douglas Merrill.

Burnham's family tells ABC 57 Halliburton was shot right in front of his three young children, on his daughter’s bed.

A fact one neighbor can’t wrap his head around.

“It’s just a total shock, and during the day. See the suspect had to come in and know what he was doing," said neighbor Bill Rodgers.

Police have not said whether the victim knew the suspects.

A Village Green representative tells ABC 57 they do run credit and background checks all applicants.

For one neighbor, that’s not enough.

“They did a credit and background check on me 22 years ago. I've still seen a lot of stuff happen in here. Credit checks aren’t going to cut it. They need to have security in the park itself," said Rodgers.

As for the victim, family members says he's currently recovering at the hospital from a shattered jaw among other injuries.

They tell me the right side of his face will need complete reconstruction and mention Halliburton will likely be in the hospital for a while.

Mishawaka Police confirm they are looking for two suspects.

Investigators urge anyone with information to contact the Mishawaka Police Detective Bureau.