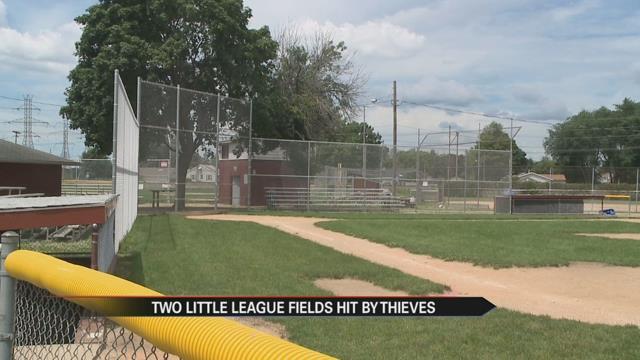 Police say a burglary at one Mishawaka Little League could be related to arrests made at another one just a couple miles away.

Tuesday around 1:30 a.m. there was a burglary at the Mishawaka Little League on Carlton Street.

“We did have a report of a burglary at the Mishawaka Little League,” Lt. Tim Williams of Mishawaka police said.

This concession stand was burglarized, and no suspects were found.

Then an hour later, another incident occurred at the FOP East End Little League on Kline Street in Mishawaka.

Police they were called there when an the alarm went off at the concession stand.

“If you’re going to run from the police you’re definitely going to have to explain why you’re running from us,” Williams said.

All five suspects were apprehended and arrested for resisting law enforcement. Two are 18, one is 17, and two are 19.

They were booked in the St. Joseph County Jail, charged with resisting arrest.

“We need to make sure that our investigators have a chance to really thoroughly investigate it before any charges for burglary or any apprehensions for burglary are made,” Williams said.

Police aren’t sure if the two incidents are related.

Regardless of the outcome, the leagues say this kind of crime hurts. Both leagues are run almost entirely by volunteers.

"We work hard to keep a park going. Little league is a volunteer run organization. Many of us put in our own money and countless hours so children have a place to play ball. When they vandalize and steal from us they are stealing from the kids who play at our park. We are not a city run park. Our funding comes totally from our families, sponsors, and donors." said Melissa Ziegert, with the FOP East End Little League.

Lt. Williams agrees, making him that much more determined to solve the cases.

“This just hurts our programs and we need more programs like that there, and the existing ones to flourish because it gives our children something to do during the summertime,” Williams said.