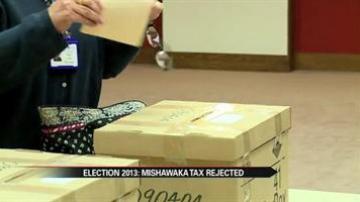 MISHAWAKA, Ind.-- A poor turn-out from Mishawaka residents meant a failed referendum for the school district. Officials said a non-scheduled special election on an off-year is likely the cause.

“They did a horrible job marketing this and look at the vote. They didn’t prove their point," said Mike Wojtysiak, chairman, noto28million.org.

Wojtysiak spent $6,000 on a campaign against the referendum and says it paid off.

“Pleasantly surprised. I think when you lay out the facts of the dollar amount amount it was just too much.”

Most voters felt very strongly about the school district’s request.

"We’ve seen a couple people in a huddle talking about it, but I think most people that I’ve seen have had their minds made up and this was a pretty quick process for them," said James Mitchell, judge, election board.

But some residents say they voted “yes" because you can’t put a price on education.

“Education is one of the most important things we can do for our children and I just feel that it’s a very important thing that we support our city school system and the teachers and everything that they need," said Kay Warren, voted “yes” to referendum.

Jim Michels doesn't have any children but he agrees.

“The kids do need to have a good education to succeed in the world nowadays and if they don’t get it they’re not going to succeed," said  Jim Michels, voted “yes” to referendum.
Share this article: