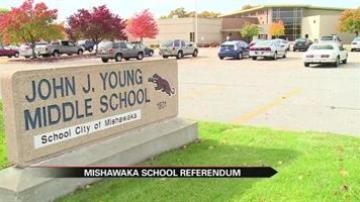 MISHAWAKA, Ind. -- On Tuesday, Mishawaka residents will decide on whether or not they are willing to pay higher property taxes in order to fund $28 million worth of improvements to nine schools in the district.

If the people of Mishawaka vote "yes" to approve the referendum, John Young Middle School would get $3,171,626 in renovations.

We asked Mishawaka residents how they plan to vote Tuesday.

Jenner says she plans to vote against the referendum.

"They're going to hit us every year for 20 years. I'll be dead and gone and my wife will still be paying the taxes," said William Dempler.

Dempler plans to vote against the referendum.

"I guess it just depends on how much money I have in my wallet and what my mood is," said Tom Stachowiak.

Stachowiak is leaning towards voting in favor of the referendum.

The school district is asking Mishawaka residents to vote in favor of improving nine district schools. The total bill is around $28 million in the form of a bond.

Two schools that would get the most money are John J. Young Middle School and Mishawaka High School.

"Well the roof I could see, I mean if it's leaking or something, but just for convenience renovations, I just don't see it," said Jenner.

Other proposed improvements include $400,000 in carpet at john J. Young Middle School and $100,000 for pool piping at the high school

We asked some residents if it was just sticker shock.

Stachowiak says he's retired and on a fixed income. He changed his tune when he learned how much it would impact his property taxes each year.

"I'd vote for it," said Stachowiak.

A firm hired by the district named Umbaugh estimates the impact will range anywhere from $48 to $480 depending on the value of your home.

"I mean what's $100 anymore today? You blow that much on a weekend. Pay it and get the kids an education," said Stachowiak.

For a line by line breakdown of where the $28 million would go, click here.