Mishawaka students forced to walk through the snow 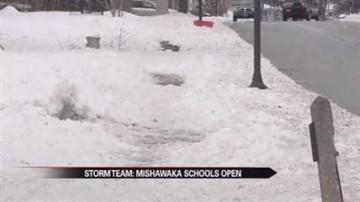 MISHAWAKA, Ind. -- Snow forced dozens of schools to delay or close Thursday, but in Mishawaka, school was in session. Some parents weren’t happy with that decision because many students had to walk through snow covered sidewalks to get to school.

Roxanne Yeakey, a mother of three, didn’t think the students should go to school Thursday.

"I was actually quite upset when my car got stuck this morning. I was like why? Why are they going to school?” said Yeakey.

Her two high school aged children walk to school and that was a big concern for her.

"Other schools will be canceled and they have school buses and it's too dangerous going to school on a bus, but it's okay for our kids to walk? You know kind of makes me a little angry,” said Yeakey.

Some city sidewalks close to the schools were not cleared, yet students had no choice but to walk through it.

“As a city expecting residents to do their sidewalks. It is our obligation to keep up on stuff,” said Tim Ryan, Assistant Street Commissioner.

Ryan says his crews plow close to 17 miles of sidewalks in the city limits.

"We do not do the schools, the sidewalks around the school. Mishawaka city school does them themselves. We have some that lead to the schools that we do,” said Ryan.

Residents also have to do their part, like 85-year-old Mr. Barth.

He says no matter how heavy the snow is he'll clear the way for the kids.

We called Mishawaka Schools to find out what their reasoning was behind having school considering they do not have buses. no one returned our phone call.