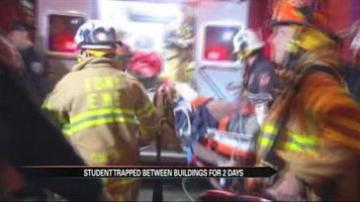 NEW YORK -- A 19-year-old New York University student is recovering in the hospital after he was discovered wedged between two buildings.

New York rescue officials say the teen was found wedged between two buildings in a space just a few feet across.

Firefighters had to break through a concrete wall to get him out.

The rescue took more than an hour.

He had been reported missing by his friends late Saturday night.

"Had we not told the security guards, the three of us 19-year-old students, to check the roof they would not have found him for who knows how long and he would probably be dead right now," said student Michael Yablon.

Officials say the victim might have fallen five stories out of a window before getting stuck between the buildings.