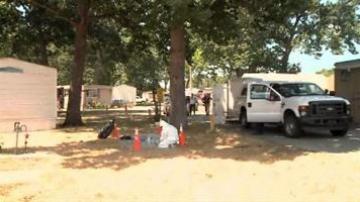 ST. JOSEPH COUNTY, Ind. – Police responded to the discovery of a possible mobile meth lab, but where police were called was not where the bag carrying the materials was found.

St. Joseph County Police said a property owner on Fir Road found a suspicious backpack in a wooded area on his property. That’s when police said he put the backpack in his car and drove it a couple miles south.

The Indiana State Police Suppression Team was called near the intersection on McKinley and Byrkit Avenues to sifted through the suspicious material. This is about 1.6 miles away from the property where it was found.

Redman said it’s unclear as to why the driver moved the bag to its new location, but it made the situation pretty dangerous.

The meth-making materials ended up just feet away from homes and businesses.

Three trailers nearby were evacuated, but the residents were let back in after a couple hours.

Police said if you ever come across suspicious material on your property, don’t ever move it.

"If you find something suspicious on your property contact police right away, don’t handle the property, don’t even touch it, don’t go near it," said Redman.

Police said this investigation is ongoing. They were planning on investigating the property where the backpack was found to see if they could find any leads or possible suspects.