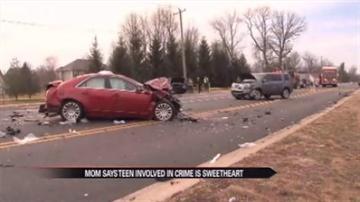 INDIANAPOLIS -- It is not every day you hear crime spree, teenager and sweetheart all in the same sentence but that is what one Indiana mom is saying about her son.

Last week, two teens were arrested in a crime spree in Indianapolis that involved robberies, a deadly shooting, a chase and another shooting.

One teen has been charged as an adult but his mom says he is a sweetheart - and it isn't possible.

"He's very loving and caring. This is just totally not him. It's just not him," said Tyease Dunn, teen's mother.

The teens were arrested February 13th.

Both have lengthy histories in the juvenile court system.