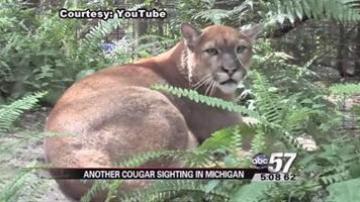 ANN ARBOR, Mich. -- In Michigan people are on alert after reports of two more cougar sightings in the state.

This time one was spotted on the campus of the University of Michigan. Campus police issued an alert about a suspicious animal.

It was seen on the North Campus of the school Thursday morning and someone else said they spotted a big cat later that afternoon.

Earlier this year there were reports of cougar sightings in Cass County, but the DNR said they probably were not true.

Although cougars are originally native to Michigan, the DNR said they were thought to have been wiped out in the state during the turn of the century.