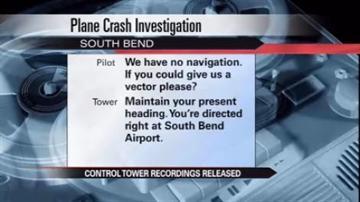 ABC57 has the control tower recordings from the day of the deadly South Bend plane crash. They help explain the final moments before the plane crashed into a neighborhood on Iowa Street March 17, 2013.

As the pilot descended towards South Bend Airport, his Hawker Beechcraft Premier 1 jet seemed to give out on him.

Minutes before making a landing attempt he called into the control tower.

Pilot: Engine is at dead stick. No power. We've lost all power and we have no hydraulics.
Tower: We'll have equipment standing by. Is the aircraft controllable?
Pilot: Barely controllable

Shortly after losing hydraulics they also lost the ability to navigate.

Pilot: We have no navigation. If you could give us a vector please?
Tower: Maintain your present heading. You're directed right at South Bend Airport.

That would be the last time the tower would hear from the pilot.

Tower: If you can hear me, you are cleared for divisional approach on runway 9R right or any runway. All runways are available at South Bend.

Amazingly, they still made it toward the runaway and even got the plane down but were told to pull up.

Tower: You have no gear, go around. If you can hear me go around.

The control tower continued to talk to the doomed aircraft hoping it would make it safely to the ground.

Tower: If you'd like to remain in the pattern that is fine, I cannot hear any of your transmissions. Anything you want to do right now is fine. I do not see your altitude. Just as a heads up, vehicles are standing by at South Bend.

In the end, the plane would hit two homes before coming to a rest in a third.

Tower: Down. Down. Crash. Crash.  South Bend Airport is currently closed for an aircraft accident.

Davis and Caves both died in the crash.Two others in the aircraft were injured.

One person on the ground was injured.

The crash is still under investigation. It may take as long as a year for the final crash report to be released.