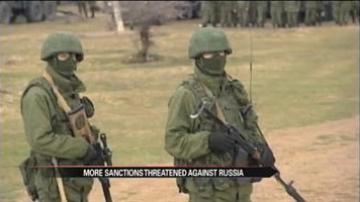 KIEV, Ukraine -- Thursday, President Obama is warning Russia about more consequences to the country's economy if country leaders do not do more to ease the tensions in Ukraine.

President Obama said it is pretty clear there is no military solution to the crisis.

Instead he said the United States and our European allies want to show Russian President Vladimir Putin that further escalations will hurt his country just as much as Ukraine.

"We have been preparing for the prospect that we have to engage in further sanctions. Those are teed up," said President Obama.

The threat of extra sanctions comes after at least two pro-Russian militants were killed in Kiev.

Russia responded saying it will start military drills right along the border.