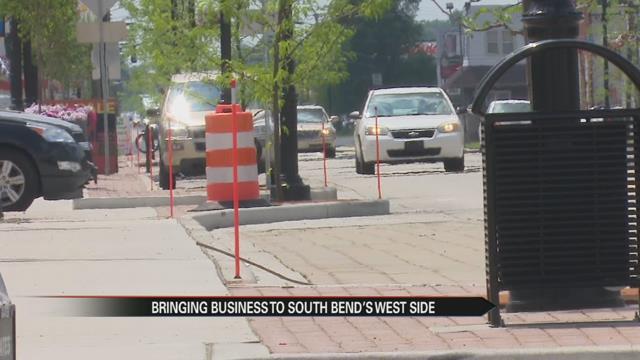 In December 2015 a few blocks were renovated with a new traffic flow, new bike lanes, sidewalks, and street lamps.

At that time community organizer Sam Centellas, with La Casa de Amistad said he was going to throw an event similar to First Fridays specifically for Western Avenue.

Today was the sixth ‘West Side Wednesday’ event he hosted.

“So a lot of people haven’t been out to this side of town especially after all the new improvements. There are just a lot of things that are going on that that we want people to come and try,” says Centellas.

Centellas says after the first phase of construction from Dundee Street to Bendix he knows the kind of results to expect.

Centellas hopes the work and his events widen the welcome to visitors of the West Side.

“You don’t have to go to Chicago to experience culture new things to try something that’s maybe outside of your normal diet,” says Centellas.

A West Side Wednesday event has seen as many as 56 people.
.
If the events continue, Centellas will be able to show off more than just three renovated blocks.

The city plans to invest about $2.5 million on the entire West Side Main Streets program.

“This neighborhood had a lot of vacancy. It developed a reputation as there is nothing to do out there and so here we are trying to let people know that there’s a lot of great different things to do out here on the west side,” says Centellas.

Construction is planned to start in the spring of 2017.

The next West Side Wednesday event is on July 20th. The event will be a block part held in the afternoon.