Morgan Uceny back for a visit in her old stomping grounds 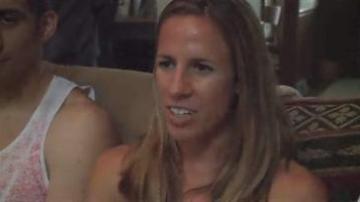 PLYMOUTH, Ind. - Last month Plymouth native Morgan Uceny competed in the 2012 Olympics in London. This weekend she was back in her stomping grounds visiting with her family and the community.

Morgan lives in California now a day, but the 2003 Plymouth graduate says she really enjoys coming back to her roots because she can truly feel the communities support. Morgan said, "the whole house has been busy this weekend with a ton of family member coming out yesterday and just a lot of family and friends coming out to say hi." Morgan and her brother left for Indy shortly after speaking with ABC 57.

Morgan's Mom Brenda Uceny said, "we like to be as normal as possible but as parents, it's about her."

On Sunday the Uceny's visited the Blueberry Festival to take in the sights and sounds. Where ever Morgan goes she said kids tend to approach her and ask it they can get a picture or autograph. "It was a great welcome home and it was something I needed after you know being away for so long and the Olympics ending the way they did. It was just nice having the support of the community when I came home,"  she said.

Brenda said,"when the little kids come up and grab her leg or her arm and you know, want to give her a hug it's a very proud moment."

Morgan tripped in the 1,500-meter final at the Olympic Games and she ended up pulling out of the race because of injuries resulting from that fall. Despite the fall, she said that she was still proud of her performance.

"I executed the race plan I wanted to, so the fact that I tripped and fell, it was out of my control, but everything that was in my control, I was happy with the way I did."

She says she is excited that she continues to inspire others. "To be a role model for them is something I really never thought about, that I would be, but to see their eyes just kind of light up and they get all shy, and you can tell they are honored to be around me so that's cool that I have impact on that younger generation," said Morgan.

Morgan's ultimate plan is competing in the 2016 Olympics, but next on her list in the near future is qualifying for the 2013 track and field world championship in Moscow.