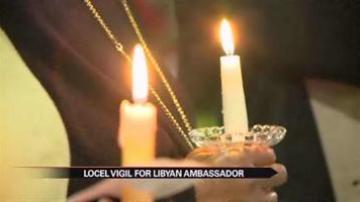 South Bend, IN -- Melissa Lentine doesn't practice Islam, but she has a sincere appreciation for different cultures and religions.

"We have common goals," Lentine said. "Our highest ideals are found in different religions, and they're kind of universal."

So when the September 11th attack on the U.S. Consulate in Libya happened, she wanted to ease people's fears about Islam, and the local Muslim community.

"I'm hoping we reach somebody that was on the fence," Lentine said.

She helped organize a candlelight vigil in honor of U.S. Ambassador Chris Stevens and three other Americans who were killed by Islamic extremists.

People from all across Michiana gathered to condemn that attack, and the other violent outbursts that have touched off in the Middle East.

"I think most people are educated enough to realize what's good and what's bad," Raghid Kadi, a member of Islamic Society of Michiana, said. "Bad people are present in any group."

Kadi said what happened in Libya is a national tragedy, and wants people to know that Islam preaches peace, not violence.

"That does not represent Islam," Kadi said. "That represents a certain group of people who have the least understanding of what Islam is all about."

Kadi and other members are hoping Friday's vigil acts as a catalyst for people to learn about other cultures.