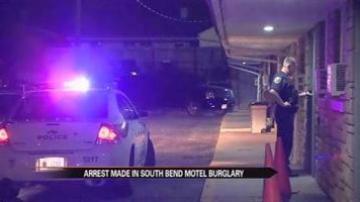 SOUTH BEND, Ind. — Police say a man who was behind a motel break-in is now in jail.

According to police, the burglary happened around 9:30 Wednesday night at the South Bend Motel on South Michigan Street.

Police arrested the man after he tried to flee from the motel.

One person was injured but police have not said if the blood was the suspect's or the victim's.

Police have not released the suspects name and are still investigating the incident.