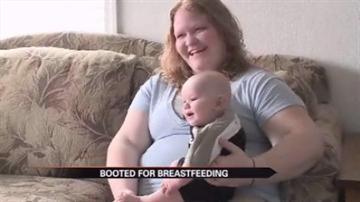 GRANGER, Ind. -- A South Bend mom says she was asked to leave a local restaurant for breastfeeding her baby. It is a controversial topic that has received national attention and is sparking outrage locally.

The family says they do not want to hurt the restaurant that asked them to leave. They just want their story to help other moms in similar situations.

For eight years, Audrey Taylor and her husband Jason tried to get pregnant.

Three months ago their son was born.

Now they’re doing everything they can to help him grow.

That wasn't a problem until Sunday afternoon when Audrey and Jason were having lunch at Tony Sacco's Pizza in Granger, Ind.

“I get everything ready and then lay the baby down and pull the upper layer shirt over while he latches and make sure everything is covered and go on with my business,” said Audrey.

Despite her attempts to be discreet, another patron reported Audrey to the on-duty manager.

The manager then asked Audrey to leave the restaurant while she nursed Jack.

"It was horrible. I was mortified and embarrassed,” said Audrey.

That request is illegal in Indiana.

For Audrey and her husband, the choice was simple. They left Tony Saccos.

The owner profusely apologized for how the situation was handled.

But for the Taylors, the issue is much bigger than just their disrupted lunch.

"We already have enough to worry about as a new mom, this is one more thing that doesn't need to be persecuted against,” said Audrey.

We reached out to Tony Saccos. They said they had no comment on this specific matter. But did say it is a family friendly environment that does welcome nursing moms.

On Tuesday, the Tony Saccos in Granger issued the following statement:

Since opening the Tony Sacco’s in Granger, we have enjoyed the patronage of many families. Breastfeeding has been a regular occurrence in our restaurant. We deeply regret a recent incident that occurred in an effort to accommodate guests who felt uncomfortable seeing a mother breastfeeding her child openly. We also regret that the mother felt the need to leave the restaurant. We did not intend for her to leave nor did we ask her to leave. As a general rule and guiding principle, Tony Sacco’s strives to provide a welcoming, family-friendly establishment that provides a relaxing and enjoyable eating experience to all customers – including nursing mothers, who are welcome to nurse at their tables or may seek assistance in finding an alternate location if preferred. That being said, we hope to make everyone feel comfortable, including those with children at the restaurant. Thus, we encourage discretion to be used when nursing and appreciate it when customers respect that.