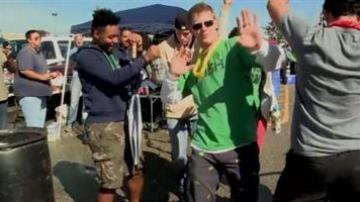 NOTRE DAME, Ind. -- The weather did not dampen any spirits for pregame festivities out on campus Saturday! Fans say they've waited a whole season to see the Notre Dame/Michigan match up! Fans came prepared for whatever Mother nature dished out!

Brian Goody traveled from Minnesota for this match up. He said every year he and his friends pick a great match up and drive the distance in a van. They had their music blaring and crowd pumped in the stadium parking section directly to the south of the Notre Dame stadium. Goody said while flipping burgers on the grill, "I like to cook and dance at the same time."

An Elvis impersonator told ABC 57 crews the mix weather wasn't stopping him from making an appearance at this big rivalry, "The king loves the rain, I did a little Tebow at the tailgate and asked my good friend to stop the rain and now we have a beautiful day here."

Nick Fedorenko a former Notre Dame football player made the trip from Ohio. "Notre Dame is a special place, it's our lady school and we are all very proud to be part of it. I went to school here form 1972 to 1976. I played on the national championship team in 1973."

Hilary Ramirez from Austin, Texas said, "My husband went there (ND), my two brothers went there, two of my sons went there and her (sister) husband went here." Ramirez and her twin sister came prepared for some serious tailgating. She said, "We have ponchos, we put our cell phones in Ziploc bags I have gloves, umbrellas, hats."

At the Pfeifer tailgate the family is divided. Half are rooting for Michigan and the other half is rooting for the Irish.

Six year old Abraham Barcenas was excited to tell ABC 57, "We are going to have a taco bar." His family who owns Sangria's Wine Bar located on North Michigan Street in South Bend. They had a large spread of food and family at their tailgate in the stadium lot.

Ramirez said the weather was pretty unpredictable Saturday, "Pretty strong earlier in the morning and then it brightened up sunshine and then it started to rain again, I think we are in for a big mix, I hope it doesn't get too bad."

Fedorenko said in a laughing matter, "I think our lady sent the rain a little bit to slow down Denard Robinson."

In case you don't understand the reference, Robinson is the starting quarterback for the Michigan Wolverines.