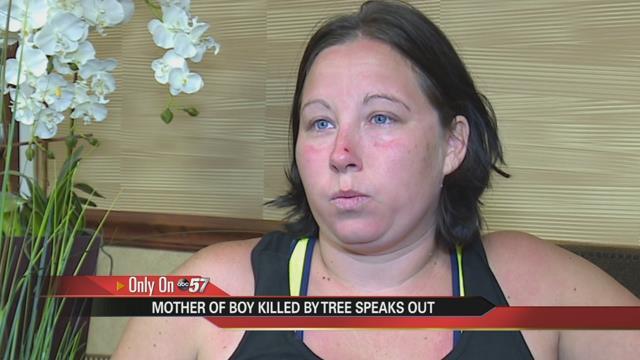 One family is living a nightmare after 10-year-old Blaike Glassburn was killed by a tree limb while camping at Indiana Beach.

"The night before he got hit by the tree he said, 'Mom, I really love my family,'" said Delmarie Hershberger, Blaike's mother.

Quality time for Blaike's family includes a trip to Indiana Beach each summer.

Early Tuesday morning, lightning struck a tree at their campsite. A large branch fell on the family's tent.

Hershberger said she awoke to discover her son had been crushed by the limb.

"Blaike was just lying there in a pile of blood. And the tree was on him," said Hershberger.

Hershberger shared a photo of the site after the tree fell.

"For him to be so helpless in the tent, I couldn’t do anything for him. I felt so terrible as a mom," said Hershberger.

Hershberger says she can’t blame herself or anyone else for an act of nature.

"Indiana Beach has done everything they can to help us. They’ve all been there for us," said Hershberger.

In her time of mourning, it’s the happy times with her youngest she’s holding on to now.

"Blaike was a happy kid. He loved school. Every morning at 7, he couldn’t wait to get up and go to school," said Hershberger.

"If he was sitting next to me right now, he’d wipe my tears. That’s the kind of kid he is," said Hershberger.

On Thursday, before Hershberger heads back to Mishawaka, there will be a vigil near the campsite for Blaike.

Hershberger believes Blaike is with his grandpa.

"My dad loved fishing. And Blaike always wanted to go fishing with my dad. And I know they’re fishing. I just don’t want them to fish without me," said Hershberger.

Hershberger says she has already spoken with Blaike’s principal and they’re discussing how to tell his classmates what happened when the school year starts again.

As for Indiana Beach, they’re paying for a hotel for Blaike’s family.

There will also be a candlelight vigil in the parking lot of Twin Branch Elementary at 9 p.m. on Saturday June 18.