Mother of child hit by truck speaks out 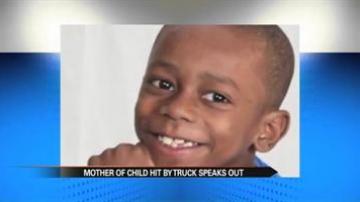 DETROIT -- The mom of the 10-year-old who was hit by a truck in Detroit is speaking out for the first time.

She said she did not want her son to go down the street to play but his dad said he could.

Just moments later, surveillance video from a gas station showed the boy suddenly stepping off the curb right in front of a pick-up truck.

Witnesses say they have seen kids play a dangerous game of chicken there where they jump in front of car and then back on the curb.

"I have taught my child how to cross the street, but when kids go out they are going to be kids. They are going to have fun or try to at least. All we can do is hope they do what they were taught," said DeAngela Harris.

David suffered gashes to his mouth and a broken foot.

The driver of the truck got out to help the child but he was beaten up by a group of guys, beaten so badly he nearly died.

Five people have been arrested. Police are still looking for at least five others.