Mother of NBA player dies due to complications from coronavirus 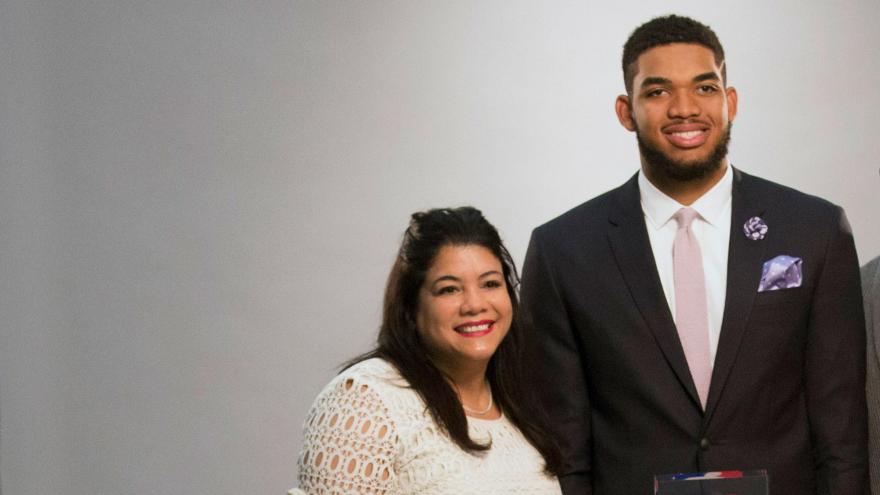 Jacqueline Towns, the mother of NBA player Karl-Anthony Towns, died on Monday April 13, 2020, due to complications as a result of the novel coronavirus, according to a statement. Prior to publicly sharing his mother's condition, Towns made a $100,000 donation to the Mayo Clinic to assist in its effort to combat the coronavirus.

(CNN) -- Jacqueline Towns, the mother of NBA player Karl-Anthony Towns, died on Monday due to complications as a result of the novel coronavirus, according to a statement from a Towns family spokesperson released by Towns' team, the Minnesota Timberwolves.

"The Towns family is heartbroken by the untimely passing of Jacqueline Towns due complications as a result of COVID-19," the statement said.

She had been "battling the virus for more than a month" when she ultimately succumbed to it, according to the statement.

Towns made his mother's struggle with Covid-19 public in an emotional video released in late March. In it, he announced that his mother had been put on a ventilator in a medically induced coma.

He said he shared the video in the hopes that everyone would stay at home.

Prior to publicly sharing his mother's condition, Towns made a $100,000 donation to the Mayo Clinic to assist in its effort to combat the coronavirus.

The Timberwolves said Towns' mother was "beloved by our entire organization."

"Her passion for life and for her family was palpable," the team said in its statement. "As Karl's number one fan, Jackie provided constant and positive energy for him and was beloved by our entire organization and staff at Target Center as she supported her son and the Timberwolves."

A handful of NBA players sent their condolences on Twitter.

"Wow... I hope everybody is taking this pandemic seriously... Continue to Pray for every family through this tough time, and hold your Loved ones Close," Atlanta Hawks star Trae Young tweeted on Monday.

In the family statement, the Towns family said their matriarch "was many things to many people - a wife, mother, daughter, grandmother, sister, aunt, and friend."

They described her as "an incredible source of strength; a fiery, caring, and extremely loving person, who touched everyone she met. Her passion was palpable and her energy will never be replaced."

They thanked "the medical warriors" who cared for Towns at Penn Presbyterian Medical Center and JFK Medical Center, noting they also helped her husband and Karl-Anthony's father, Karl Sr., recover from the virus.