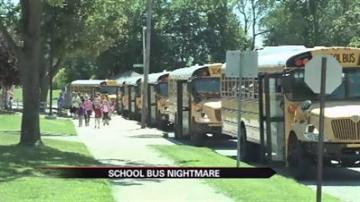 SOUTH BEND, Ind. -- One South Bend mother says the school district lost her 5-year-old daughter on Thursday. She said her daughter was missing for several hours because she was put on the wrong school bus.

"The bus shows up at 2:50 - 2 other students get off, but not my daughter," said Tabatha Grolemund.

Thursday afternoon was difficult for Grolemund.

When the school bus pulled away, instead of walking home with her daughter in hand, she was left searching for her missing child.

Grolemund says it was Evangeline's second day of kindergarten at Monroe Elementary in South Bend.

She says at the end of the day, Evangeline was put on the wrong bus.

"These are people we are supposed to trust to make the decision to put our daughter on the right bus to be sent home," said Grolemund.

When Evangeline did not get off the bus Thursday afternoon - Grolemund went looking for her at Monroe Elementary.

When Grolemund finally found her daughter, Evangeline told her mom about her very long journey home.

Evangeline told her mother that after she was put on the wrong bus, she was eventually dropped off at John Marshall Intermediate.

From there, she said a man in a van gave her a ride back to her own school, Monroe Elementary, where her mother found her.

Grolemund says she hasn’t gotten any answers from the school about what happened or how they would make sure it doesn't happen again.

"They won't give us no answers," said Grolemund. "What if she didn't know? What if she wasn't paying attention? Where would she be? Who could have had her?"

Grolemund took her daughter out of Monroe Elementary and plans to either transfer her to another school or home school her.

We also tried to contact South Bend Schools about the incident. They did not answer our phone calls.