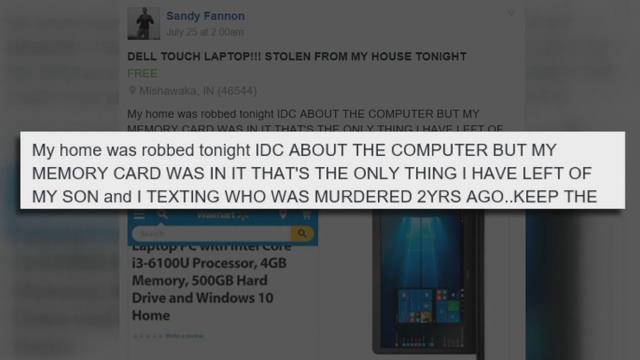 One mother’s last memories of her son may be gone forever. A Mishawaka woman’s laptop was stolen on Sunday, and she has still hasn’t gotten it back.

The woman, Sandy Fannon, said she doesn’t even care about the laptop. She just wants the memory card back.

That’s because it contains Sandy’s  last pictures, text messages, and voice recordings she has of her son, Christopher. He was murdered back in 2014 at the age of 21.

Having her memory card stolen is “like losing him all over again,” Sandy said.

She had just left for 15, maybe 20 minutes to go visit her grandkids around the corner from her house on 325 West Eleventh Street.

“And I had just put that memory card into the computer not even a half hour before that,” Sandy said.

When she came back…the laptop was gone.

“They can have the computer. I don’t want it back. I just want that memory card. That’s all I have left of him,” she said.

She went to the police right after it happened, but she also decided to take the matter into her own hands.

She posted on Facebook in the Mishawaka Free or for sale group, saying exactly what she just said—“I don’t care about the computer, but my memory card was in it…that’s all I have left of my son.”

“And I got a ton of responses of how sorry people are, and it’s just amazing that there are that kind of people still out there,” said Sandy.

She says Christopher always brought people that kind of hope. He was a happy-go-lucky young man that loved Batman and served in the army.

She just wants to be able to hear her happy son again.

Mishawaka police are still searching for the thief, and Sandy’s still hoping the person who took her memory card will just slip it under her door that’s right behind me.

If anyone has information about the missing laptop, please contact Mishawaka police.