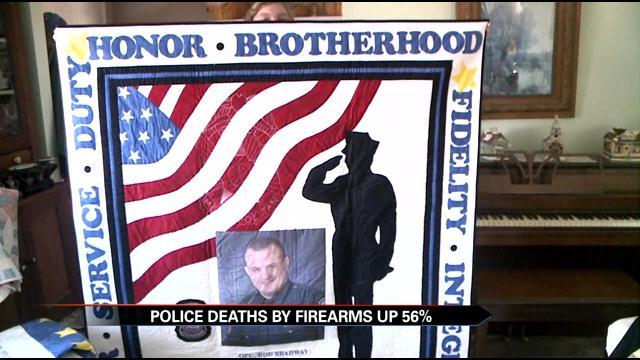 Over 50 percent more police officers were killed by guns in 2014.

Bradway was shot and killed in the line of duty back in 2013.

He was a Nappanee native.

Sheri Bradway, mother of Rod Bradway said the feeling of losing her son is something she still can't describe today.

Now over a year later she said watching stories of more officers being ambushed is still hard to digest, but she has found a way to heal.

An oath officers, deputies, and state troopers take is to protect and serve.

Each and everyday men and woman put on their uniform not knowing if they will  return home to their loved ones.

The day his mother, Sheri Bradway, took a call around two in the morning that Rod had been ambushed and killed paying the ultimate sacrifice.

A year and a few months later, new statistics show an increase of officers dying in the line of duty.

Specifically a 56 percent increase from last year of officers killed from gunfire.

Making it hard to watch for mothers like Sheri who say"Each time an officer is killed my heart grieves I know what that mother is going to go through, it's a loss that you cant explain."

She remembers her son, and all his brothers and sisters who have lost their lives.

Describing the thin blue line saying, that it's a fine line between good and evil

Sheri said quilting has helped her heal, she made one in memory of her son after he passed.

Then started “A quilt for mothers tears”, an organization that makes a quilt for every mother who has lost their son or daughter while answering the call of duty.

She encloses them each with this message,

"Grief never ends but it changes it's a passage not a place to stay grief is not a sign of weakness nor is it a lack of faith it is a price of love."

Sheri and her family have plans to attend a memorial in May in Washington D.C. to present the quilts to the mothers of fallen serviceman.