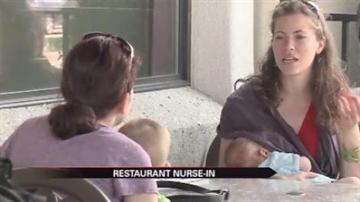 GRANGER, Ind. -- Tony Sacco's Pizza has only been open a few months and they do not want to lose customers over a recent mistake. A breast feeding mom was asked to either nurse the child in the bathroom or outside, contrary to Indiana law. Nursing moms staged a nurse-in at the restaurant on Thursday.

Mothers filled the patio at Tony Sacco's for the area's first nurse-in.

The moms said they're tired of how society sexualizes a woman's body.

"It is not so men can ogle and play with them, it is so they can feed the child,” said Mindy Cooper.

"There are things that are law, that people don't know are law and nobody gets held accountable for them,” said Lindsay Kelley.

Tony Saccos says it will hold itself accountable by publicly apologizing and even bringing in corporate to attend the nurse-in.

"We just want to be sure that people understand our goal is to be a family-friendly restaurant and that definitely includes breast-feeding moms,” said Cindy Kangus, Corporate Director of Marketing for Tony Sacco’s.

Jesse Arredondo, the General Manager of Tony Sacco’s, doesn’t think his employee deserves to be terminated.

"There would be an opportunity to terminate somebody for an action, but this wasn't it,” said Arredondo.

So the restaurant welcomed the nurse-in and will be handling all future complaints with the person complaining.

"People who complain about women who breastfeed in public were probably breast fed as children,” said Cooper.

Indiana law says "Not withstanding any other law, a woman may breast feed her child anywhere the woman has a right to be."

The manager said he hopes the nurse-in both educated his employees and also proves that Tony Sacco’s is a family friendly restaurant.