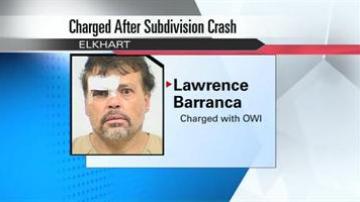 ELKHART COUNTY, Ind. -- A motorcyclist has been charged for operating while intoxicated for allegedly racing in an Elkhart subdivision Tuesday evening.

"The guy is extremely lucky to walk away from it and even being alive," said Dan Greenawalt.

Neighbors said they saw Lawrence Barranca racing through their subdivision on his motorcycle.

"We heard two vehicles zoom buy our house. We immediately raced outside and saw that someone had hit a tree and I immediately called 911," said Jessica Gilson.

According to police, Barranca lost control of his motorcycle on Spring River Drive, drove through a yard and then he went airborne, hit a light post and ended up slamming into a tree.

"He wasn't wearing a helmet. The man's lucky," said neighbor Dan Greenawalt. "The neighbors usually have their vans sitting right where they are at now and had they been sitting there at the time of accident it would have been much worse."

Neighbors said this isn't an isolated incident; cars speed down this road all the time.

"They obvs don't know what the speed limit is because they are going 50, 55 mph down the road," said Gilson.

Greenawalt said he would like to see more speed limit signs in the subdivision.

"It might help. I don't think there's any in the whole complex, there might be one out by the entrance," said Greenawalt.

Neighbors say with or without the speed limit signs, people need to slow down.

Barranca has been charged with operating while intoxicated.