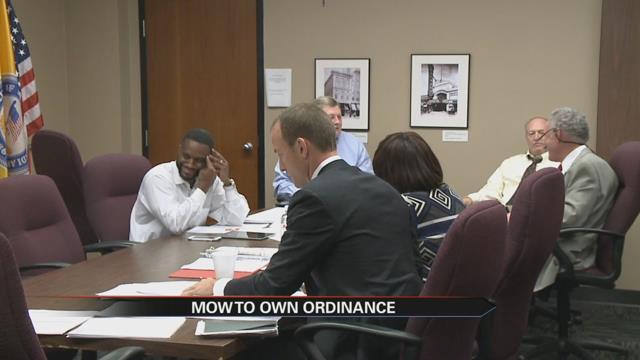 South Bend’s Common Council is looking for ways to cut down on blighted properties throughout the city.

It’s called mow-to-own and it’s a new proposal that could reward good Samaritans responsible for keeping up their neighborhoods.

The council discussed that potential ordinance during Monday’s committee meeting.

This is a proposal adopted from a popular ordinance in Memphis, but there could be hurdles in Indiana stopping it from becoming an ordinance in South Bend.

“If we have the ability to change the quality of life of our neighborhoods for the positive, let’s do it,” said Common Council member Henry Davis Jr.

It’s the quality of life for residents forced to walk past tall lawns and forced to live next to blighted properties that inspired the councilman to pursue change one lawn at a time.

“I was getting calls more than 50 percent of the time about grass not being cut,” said Davis. “We already have people that are currently cutting neighbors’ lots or lots adjacent to their property so if we can just put some legislation through to make sure that lot can be secured, we’re not only making sure that the lot has an owner but we’re also purring it back on the tax row.”

The proposed a Mow-to-Own ordinance would grant residents the opportunity to purchase abandoned lots from the city as long as they maintain it.

And on the heels of the completion of the city’s "1,000 Homes in 1,000 Days" initiative, some residents say there are quite a few lots in need of upkeep.

But Indiana laws currently do not allow Hoosier cities to control the land or land banking as code enforcement calls it.

“We talk about a lot of great ideas but until the state gets behind these ideas throughout the other cities, it’s just really tough to implement something like this,” said Randy Wilkerson, Director of South Bend’s Code Enforcement.

The committee approved the resolution and the proposed ordinance was heard during Monday’s general meeting as well.

There will be another meeting to discuss the proposal further, then the council will take a vote.