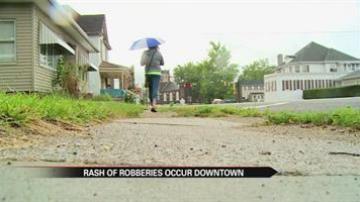 SOUTH BEND, Ind. -- There were three armed robberies in a three block radius in downtown South Bend in just 7 days. Victims told police the suspects used knives and guns. Now residents who live in the area feel like it's no longer safe.

Emily Mann and three of her friends were walking home one night in late June when they were victims of an armed robbery on West Marion Street.

"It was late at night but I mean the area is pretty well lit and there was a big group of us so we didn't really think much about it," said Mann.

Mann says the suspect came out of nowhere.

"A guy came up behind us and I turned around just in time to see him fire his first shot," said Mann.

Mann says she had to decide in a split second whether to stay and fight or flee.

"Me and the other girl I was with, I grabbed her and we ran. I was like, in my head I was like just get to Lincolnway where there's lots of lights and lots of cars," said Mann.

Mann and her friend escaped, but she heard the rest of the confrontation between the man with the gun and her boyfriend.

"He fired one more time towards the boys. He demanded all of their stuff out of their pockets and they gave it willingly," said

Mann and all of her friends made it out without any physical injuries, but she says that night still haunts her.

"It kind of sucks when you are so used to being able to walk around and feel comfortable and I mean it was a big selling point when moving here too is being walking distance from all these great local businesses and now we just, we can't do that anymore," said Mann.

Her advice is to be aware of your surroundings and pay attention to who's around you.