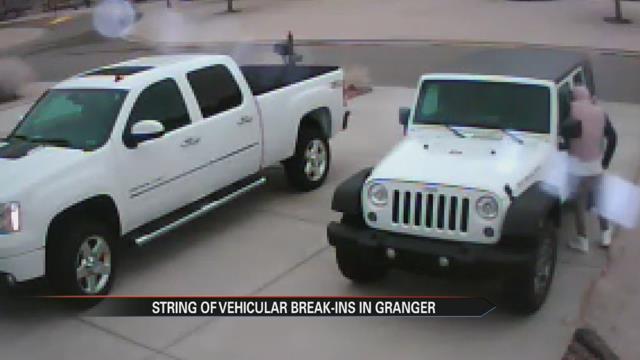 A dramatic smash and grab caught on video is just one of a few recent thefts affecting Granger drivers.

Elkhart County Sheriffs are looking for a male suspect, after a recent car break in was captured by a home security camera.

Two other “theft from vehicle” reports filed from locations less than a five minute drive away from each other in Granger.

"The first thing you think of is to protect your family,” said Granger resident Nikki.

Family was one of the many troubling things on her mind early Monday morning when she got a glimpse of a crime happening just a few feet away from her window.

Although she and her family were untouched, the suspect, who she describes as a shorter man wearing sweats and high top shoes, was caught on camera grabbing Nikki’s wallet out of her Jeep.

“I honestly don’t understand why somebody would do something like that,” she said.

“We need the eyes and ears of the people to feed us information that could be valuable," said Capt. James Bradberry of Elkhart County Sheriff's Department.

And that information could help people like Mary Shearon.

“This is the third time it’s happened," said Shearon.

Who says a thief invaded her driveway.

“[My husband said] 'We’ve been robbed,'" she said. "He said somebody broke into my car.”

She also says the thief violated her backyard.

“Somebody had relieved themselves underneath the swing set," she said.

And now she and other Granger residents want to see it stop.

“I really feel sorry for these people that have to stoop this low," Shearon said.

At this point, police cannot say if the incidents are connected.