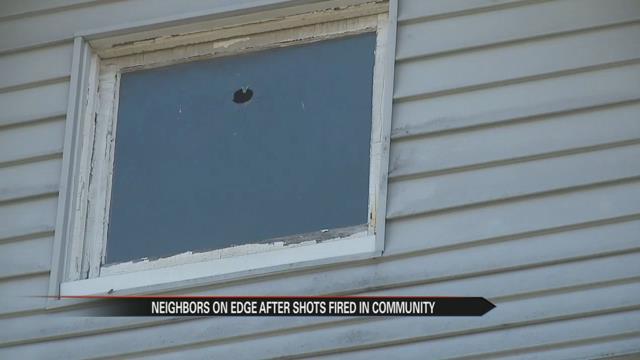 In broad daylight, on a busy street the sound of gunfire had an Elkhart neighborhood on edge. On Thursday the search is on to find out who recklessly started firing.

Stankovich lives near the corner of West Marion and Eighth Street where shots were fired just before 5 p.m. Wednesday afternoon.

On Thursday, the sight of multiple bullet holes mar a home and memories haunt a witness.

“Oh it was frightening it was very frightening to see somebody with a live gun,” says Stankovich.

Stankovich watched from her window as an altercation went down on this corner.

“Lots of commotion across the street and all of a sudden I see a black gentleman walking across the street like he is coming into our yard and he had the gun in his arm and he pointed and it was out like this,” demonstrates Stankovich.

Police say a group was walking down this street and got into an argument with someone driving a gray SUV. Then shots were fired. Bullets struck a home, a window, a car, and grazed a man’s arm.

“It’s concerning where we see a verbal altercation turn to gunfire. Luckily a person just had a graze wound. A couple more inches, another foot, we could be looking at a homicide,” says Sergeant Chris Snyder with the Elkhart Police Department.

Police found four shell casings in the area and a handgun in a nearby the alley.

Stankovich says that handgun is a sight she won’t forget.

“It was spooky because ya know the guy running through the yard if I would have been a few seconds later its quite possible he could have shot me just for seeing him with the gun,” says Stankovich.

Police continue to investigate this case and say at the very least the suspects could be facing felony charges of criminal recklessness.