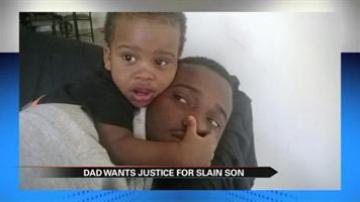 SOUTH BEND, Ind. -- The father of a man shot and killed March 26 wants others to use his son's death as motivation to put down their guns. Family and friends held a prayer vigil for 21-year-old Tyrone Kelly Thursday at the spot where he was killed on Johnson Street.

"It still hasn't sunk in for me," said Christopher Reed.

Reed says it still seems surreal that his son was murdered last month.

"I don't think it has for everyone else. Everyone knows this happened, but as far as finalizing it in our mind, I don't feel like the mind has caught up with the feelings so to speak," said Reed.

Tyrone Kelly left behind an 18-month-old son, brothers, sisters, aunts, uncles and parents who are having a hard time dealing with the loss of their oldest child.

"It's not easy. One person does good one day and one doesn't and it's kind of up and down for everyone," said Reed.

A woman has been charged in his murder, 19-year-old Joilise Crossley.

Police arrested her in connection with the triple shooting that killed Kelly and injured two other men.

It's something reed says he told his family to ignore.

"It's unfortunate that there are so many people out there that feel like what she did is acceptable, but it's the norm in the neighborhood. That geographical location where all these shootings are taking place," said Reed.

Reed says his family has a strong faith and believes everything happens for a reason, but they can't let his death be in vain.

"It's just another opportunity to draw attention to an epidemic in the city- which is violence. And it has to get some attention. People have to take notice. And say OK enough," said Reed.

Crossley is in jail with a $200,000 bond. Crossley faces one count of voluntary manslaughter and two counts of criminal recklessness.