Music is playing downtown Nappanee, but not everyone is singing along! 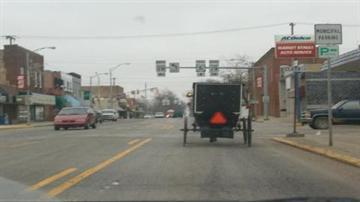 NAPPANEE, Ind. - We got a Facebook tip about frustration that was growing in Nappanee after music started playing downtown.

"Right after the Apple Festival is when the music started all the time. I just thought it was a remnant of the Festival," Dawn Yoder said while looking out her kitchen window Thursday.

Yoder is just one of a couple neighbors that live on the edge of the bid district that can hear the music flowing from the speakers.

Those neighbors told me that five classical songs play, on repeat all day.

I visited Yoder's home Wednesday and sure enough, you could hear the music from inside her kitchen with all the windows closed.

"They get stuck in your head and you just hear this constant noise all the time."

Yoder took matters into her own hands and contacted the city, she was directed to Jeff Kitson, the Executive Director with the Nappanee Area Chamber of Commerce.

"He seemed annoyed anyone would be upset about it, he seemed pretty energized by it."

I met Kitson on the street near Yoder's home Wednesday. He had just gotten off the phone with Yoder and was outside trying to see how loud it was near her home.

I returned Thursday and discovered that the music that was blasting Wednesday was a mere whisper coming from the speakers Thursday. A few of the neighbors speculated that it was because Kitson knew I was going to be in town.

"I wouldn't be so upset about this had they just took the time to talk to the people adjacent to the bid district," Said Yoder.

None of the neighbors said they were approached for input about the music before it started blaring from the speakers.

Kitson refused my request to go on camera Thursday. He said that this wasn't a news story and even asked for me to leave the city. Kitson said that those neighbors that are upset are not business owners, they are not paying for the sound system therefore they shouldn't have a say.

"To say that I'm not affected is ridiculous because I do hear it all the time," complained Yoder.

Yoder said that Kitson told her that the music was added to help bring in tourists to the city of Nappanee and that since the music was implemented sales have been up 70%, these things he refused to talk with me about on camera Thursday.

Michael George works at the gas station/service station called George's Service. The service station is right next to the Yoder's home. George says he also is tired of the music.

"Does it bother you?" I asked.

"Oh yea," George replied, "Get rid of it or find different music to put on it."

George said that he was never asked by the bid district or the chamber if he wanted the music played downtown. His service center is in the bid district. He said he said it would be nice to know what they were doing when I asked him if he wished they had asked him.

Owner of George's Service, Nancy George is also fed up.

George said the Yoder family has every right to be upset, "They are paying taxes, the same as everybody else. Sot hey should have a right to say what's going on."

George said that they are never included in anything because they are not chamber members.

I was told by Kitson that to his knowledge not a single business downtown disliked the music, George's Service said they are one.

George's Service wasn't the only business owner I talked with Thursday evening that disliked the music playing downtown but they were the only ones willing to go on camera. Several women that I talked with a several stores said they were afraid of upsetting chamber members so they would just rather stay off camera and not be quoted.

"It's pretty loud every now and then. At least it's good music. It's not like heavy metal or rap or anything," Kyle Niat, 18, of Nappanee said while riding his bike with a friend by the hardware store.

"It's pretty loud every now and then. Sometimes they keep it low. I know they cut it up really loud one day and it scared me," Niat said while laughing.

Niat said it was annoying to have the same five song play over and over again, "Get some more songs or cut the music out period."

But it wasn't all anti-music downtown Nappanee, as Kitson promised there were some businesses that liked the music playing.

"I love it, its party music, it's wonderful," Nancy Rabe said.

"A little bit of bogging down the side walk, you can just tell everyone was happy."

The music plays daily from 8 a.m. till 5 p.m. and as far as everyone has been told it will continue.

Yoder has been invited to attend the Bid District's meeting October 6th at 7 a.m. to express her concerns about the music.