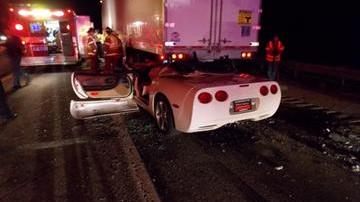 BRISTOL, Ind.  -- A man was killed in an accident on the toll road. Officials say a the man's Corvette slammed into a semi.

The victim has been identified as 44 year-old Shawn Young of Nebraska.

It happened Monday night around mile-marker 100 in Bristol.

Police say the semi driver was stopped in traffic because of a truck fire a few miles down the toll road.

The Corvette then smashed into the back of the semi and wedged itself underneath the vehicle.

The driver of the Corvette was initially taken to Memorial Hospital by a med-flight helicopter.