Naples' napping bear to be euthanized 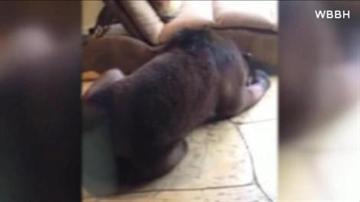 NAPLES, Fla. -- A family in Naples, Florida had an uncomfortably close encounter with a black bear at their home and they have cell phone video to prove it.

"You don't really think when you see something like that. So we were all just freaking out," said Preston MacDonough.

A black bear left the comforts of the Collier County woods, tore through the screen and settled down on the MacDonough's lanai.

The babysitter called the homeowner right away.

"I know I've been to the zoo. I've seen a bear at the zoo, but not even that close. This is the closest I've ever come to a bear let alone a seven or eight feet bear sitting on my back porch," Alice said.
The bear spent an hour on the lanai - not doing much.

Florida Fish and Wildlife says this is a problem because the bear doesn't seem to be afraid of humans.

FWC has a trap set. The next step is waiting for the bear to come.

MacDonough understands why FWC is trapping the bear but hates to think it will be euthanized.
"This is their habitat. We're invading their area. They need a place to run, to roam," said Alice.

FWC said the MacDonoughs did everything right, the garbage and pet food was all inside.

Experts think the bear was just looking for a dry spot, but it's alarming he spent so much time with humans and they'll have to put the bear down.