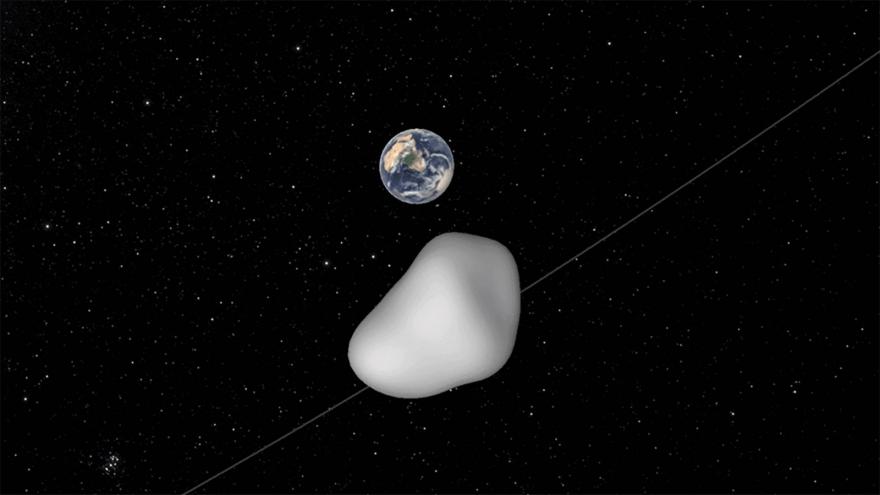 (CNN) -- An asteroid is set to speed by Earth this fall, which is exactly what NASA's Planetary Defense Coordination Office is equipped to handle.

The flyby isn't putting anyone in danger. Rather, it's an opportunity to test the agency's planetary defense systems in the event of an actual asteroid threat.

Asteroid 2012 TC4's brief swing by Earth on October 12 isn't expected to get anywhere closer than 4,200 miles (6,800 kilometers) to Earth's surface. The space rock is considered small by asteroid standards, at about 30 to 100 feet in size.

But while scientists know 2012 TC4 won't impact Earth, they don't know much else about the asteroid's trajectory. NASA tracked the asteroid for seven days after discovering it in October 2012, but that was the last time they saw 2012 TC4. In the past five years, it's been too far away.

"This is the perfect target for such an exercise because while we know the orbit of 2012 TC4 well enough to be absolutely certain it will not impact Earth, we haven't established its exact path just yet," Paul Chodas, manager of NASA's Center for Near-Earth Object Studies, said in a news release. "It will be incumbent upon the observatories to get a fix on the asteroid as it approaches, and work together to obtain follow-up observations (that) make more refined asteroid orbit determinations possible."

Michael Kelley, the lead scientist at NASA Headquarters for the TC4 observation campaign, said in the release that the flyby will test the worldwide asteroid detection and tracking network. That network includes more than a dozen observatories, universities and labs around the world.

NASA detects about 1,500 near-Earth objects a year. Small asteroids such as 2012 TC4 pass between us and the moon several times a month.

The NASA office finds and tracks these objects and figures out how to either deflect an object heading toward Earth or mitigate the effects of an unavoidable impact.

NASA is researching different techniques for keeping asteroids from reaching the planet, such as hitting asteroids with an object to slow them or changing the gravitational pull by putting another large mass nearby. It isn't possible to shoot down an asteroid, so if worse comes to worst, NASA would work with FEMA to plan an emergency response similar to how the government handles hurricanes or earthquakes.

Luckily, Earth isn't at significant risk of getting hit by any known asteroid for at least 100 years.