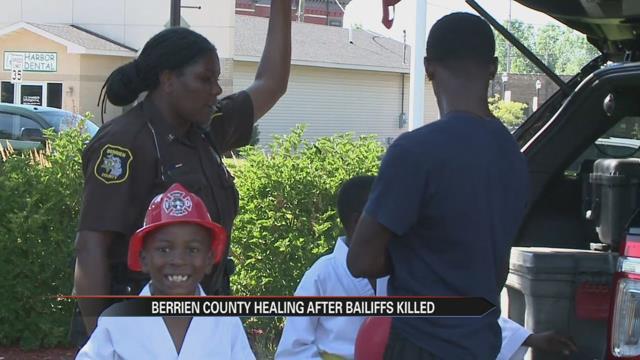 On Tuesday night, another chance to heal and celebrate those who put their lives on the line every day.

“We’re still sad, we’re still missing our friends. We will for quite some time,” said Berrien County Sherriff Paul Bailey.

A time to heal. A time to move on.

On this day Sheriff Paul Bailey can smile.

“They would want us to move on and do good things for Berrien County and that’s what we’re doing.”

As part of the National Night Out community members in Benton Harbor came together to meet, interact and see law enforcement in a different light.

Joyce Robinson is the President of National Night Out Benton Manor.

Bonding black and white, old and young and children and officers.

“This instills in our young people, the idea of going in to a career pathway as it relates to law enforcement. Because now I can talk to the police, I can touch the police, you know what I can be a police officer. This lays the foundation for that,” said Benton Harbor Mayor, Marcus Muhammad.

Congressman Fred Upton says it shows children they can live and work in their own communities.

“We want homegrown law enforcement folks if we can get them. And that’s really critical for every community,” said Upton.

An important event at the right time, as the community heals from the courthouse tragedy.

“I think it’s important, this event here. The march the day after the shooting . The community support not only here but Riverview Park in St. Joe, very positive for those that put their lives on the line every day,” said Upton.

Those like Ron Kienzle and Joe Zangaro and their friend Sherrif Paul Bailey.

Relatives of both surviving victims of the shooting, Kenya Ellis and James Atterbury,Jr. tell ABC 57 News they are both still in the healing process and not ready to speak publicly, as they try to put the events of three weeks ago behind them.