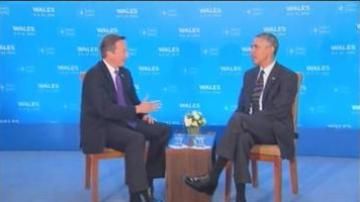 WASHINGTON, D.C. -- The growing threat from ISIS is front and center at the NATO summit in Wales.

Thursday, a strong statement of solidarity from President Obama and Prime Minister Cameron.

The two leaders wrote in a joint op-ed that quote countries like Britain and America will not be cowed by barbaric killers.

ISIS is still holding US and British hostages.

Cameron did not rule out British military action against the extremist group, if and only if it is in the national interest.

"We have take a long term, tough, intelligent, patient view of this. We are going to have to squeeze it out of existence. It is going to take time," says Cameron.

Secretary General of NATO Anders Fogh Rasmussen said the international community as a whole has an obligation to stop the ISIS advance.

"I'm sure that if the Iraqi government were to forward a request for NATO assistance, that would be considered seriously by NATO allies."

Investigators are searching these recent ISIS videos for more leads on who is responsible for the videoed executions of American journalists James Foley and Steven Sotloff.

The videos released by ISIS are a key element of their propaganda game plan.

"It's important to understand that for ISIS, every act of violence only makes sense if it gets communicated," says Security Studies expert Peter Neumann.