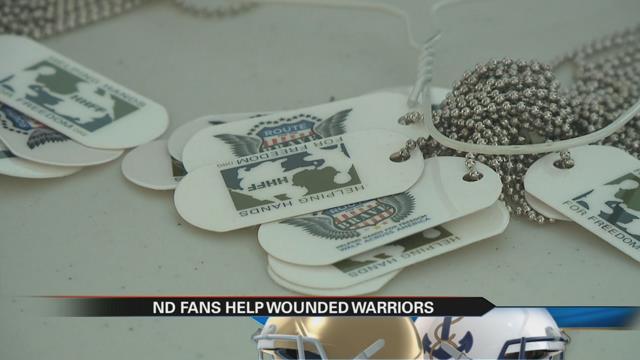 Before the Fighting Irish shared the field with the Navy’s Midshipmen, Notre Dame fans shared pre-game festivities with veterans.

When it comes to tailgating not too many communities do it quite as big as Notre Dame fans.

But Saturday wasn’t just about celebrating the home team.

It was also about celebrating the men and women that put their life on the line for our freedom.

“I will come here every year for the rest of my life to support all my brothers and sisters,” said military veteran Christopher Baim.

Baim met another Notre Dame fan Saturday with a similar story to his.

He found brotherhood in military veteran Jonathan Replogle as they shared beers before the big game.

Replogle had a dog tag around his neck that reminded him of the hard times he faced while serving overseas.

That's sobering reality that's hard to walk away from.

But in his post-military career is a sea of support.

And one organization was looking to give back.

"Helping Hands for Freedom is a mentorship program and assistance program for families for the fallen and the wounded,” said founder Patrick Shannon.

“So many people have came out here to support such a phenomenal cause, it’s humbling, it’s an honor to be here and I know it means so much to all the wounded warriors here,” said Replogle.

And they're doing it all so dozens of brave veterans can feel the love from their number one fans.

“This entire weekend is about wounded warriors and that wouldn’t be possible without the community,” said Replogle.