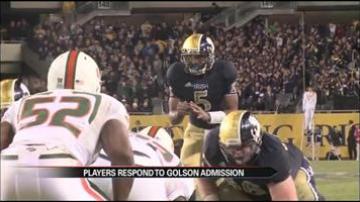 NOTRE DAME, Ind.-- In a YouTube video posted by Sports Illustrated, Everett Golson admitted Tuesday to cheating on a test while he was a student at the University of Notre Dame.

"Basically I had poor judgment on the test, it wasn't due to poor grades or anything like that," Golson said to SI's Andy Staples.

When ABC 57 talked to veteran players who had taken the field with Golson, they said they had not heard about the interview at all.

"I have no idea what you're talking about," Irish offensive lineman Zack Martin said.

"To be honest, I haven't even seen it or read anything about it," Irish quarterback Tommy Rees said.

The team says their primary focus this week is beating Navy this Saturday.

"I know Everett's doing well and will continue to work hard and do well. I wish him the best moving forward and I'm sure I'll have a conversation with him at some point, but right now I'm really just focused on this week," Rees said.

ABC 57 also reached out to the University of Notre Dame to see if they had any comment on the situation.They said they cannot comment because Golson is not currently enrolled at the university.

Golson told Sports Illustrated he hopes to return to Notre Dame in January.