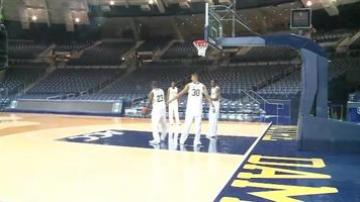 NOTRE DAME, Ind.-- It's a new team, a new season and a new conference for the Fighting Irish, but that doesn't necessarily mean a new style of play.

“Everyone said, ‘Are you going to change your style of play because you’re in the ACC?’ Well last time I checked we have a style of play here that I think has been really consistent and effective and really effective in this building. We want to make people adjust to us,” Notre Dame Head Basketball Coach Mike Brey said.

Brey said he sees more aggressive play from the ACC, which the Irish are no stranger to.

“The foremen in the ACC are a little more face-up guys, kind of like how we’ve played, instead of that brute force athletic foreman in the Big East,” Brey said.

Even though the play can be different, the Irish aren't changing up their game plan.

“With Demetrius and getting a little more minutes, we’re going to play a little bit faster, but we’re still going to be the same Notre Dame team we were in the Big East just playing how we play, so if it’s going to be a fast game, we’ll dictate the tempo,” Irish guard Jerian Grant said.

Going up against teams like Duke and North Carolina doesn't scare this year's seniors. They can't wait to take on new teams in conference play.

Notre Dame was part of the Big East conference for 18 years before joining the ACC this season.