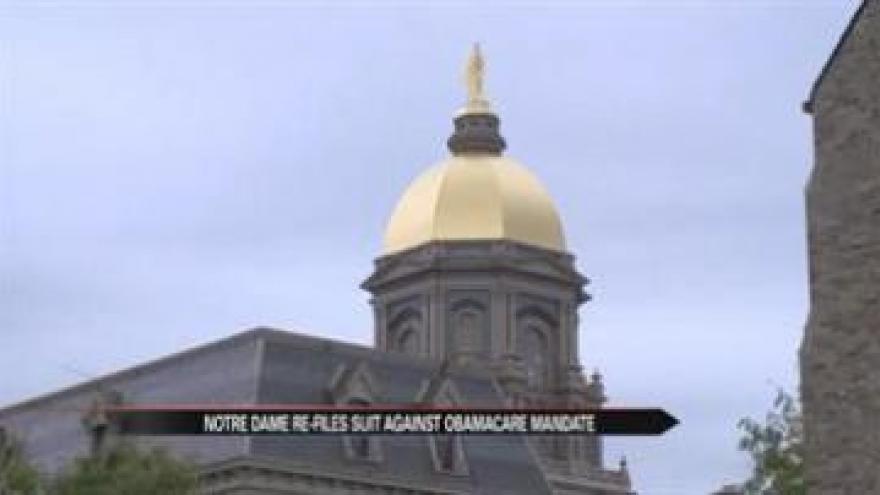 NOTRE DAME, Ind.-- The University of Notre Dame refiled a lawsuit today with the U.S. District Court for the Northern District of Indiana for relief from a federal mandate in the Affordable Care Act that would force the university to violate its religious beliefs.

The mandate would require Notre Dame and similar religious organizations to provide contraceptives, sterilization procedures among other forms of birth control through the insurance plans.

A previous lawsuit was dismissed by the U.S. District Court on the grounds that the federal mandate listed in the Affordable Care Act were not "sufficiently final" for judicial review.

Local religious organizations are backing the university, saying it's not an issue of providing health care, but the requirement to also provide methods of contraception that violates their religious beliefs.

“We want to and we always have provided health care coverage for employees, but now what they’re saying is you can’t provide health care coverage from employees, unless the insurance also includes contraceptive services and even some drugs that can cause abortions,” Catholic Diocese of Ft. Wayne - South Bend Assistant to the Bishop Fred Everett said.

And the fact that Notre Dame has filed a lawsuit sends a clear message to the government.

“Notre Dame is by far the Catholic flagship, university, church in the United States...to the extent that we’re being implicated or involved in that process, we’re saying that’s just not right,” Everett said.

Everett says it shows how far Notre Dame and other religious organizations will go to defend their religious liberties.

“We won’t compromise on our ethical positions and that if have to we’ll actually go to court to defend them,” Everett said.

Liberties say they are guaranteed in the First Amendment.

“We consider the right to worship, the right of freedom of religion to be our first freedom. If they want to promote contraception and abortion there are other ways to do it without having to violate people’s rights and that are saying we don’t want to be a part of that,” Everett said.

I am happy that Notre Dame remains in strong solidarity with the diocese and U.S. bishops in defending our religious liberty. I hope and pray that we are successful in our lawsuits opposing this government intrusion into our mission to serve the common good according to our teachings.