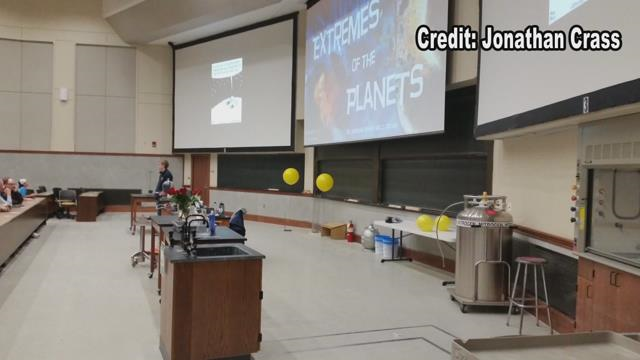 Physics will come to life inside Notre Dame's Jordan Hall on Tuesday evening. It is the final "Our Universe Revealed" Physics talks series of the semester.

The whole series was about bringing Physics and outer space into something tangible the public could see and understand.

“We will have pictures of the solar system but also demonstrations. I’ll try not to blow myself up. We’ve got liquid nitrogen, dry ice, all kinds of things, trying to show how things would react if we put them in the environment,” said Dr. Jonathan Crass with Notre Dame's Department of Physics.

There will be two shows on Tuesday, one at 6 p.m. and the other at 7 p.m. It is free and open to the public of all ages; however, the event will be ticketed due to limited space.

“It would be great to get people coming out and inspire them to be the next generation of scientists and just sort of be that spark that engages them with the subject,” Crass added.

The department had a show like this last year and was so popular they decided to bring it back this year with minor changes.

“Maybe a little bit more dangerous which is why people can’t get so hands on with it. That’s for the professionals like me to try and keep everything nice and safe at the talk. So it’s slightly different but still going to be lots of fun,” he added.

Those in attendance will have the chance to feel how cold it is on Neptune and what the surface of Mars is like.