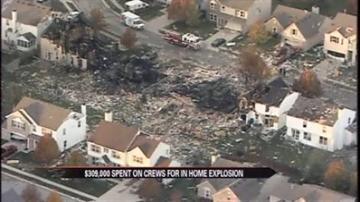 INDIANAPOLIS -- Nearly $300,000 has been spent on the investigation into the deadly home explosion in November.

According to city officials, crews have put in nearly 8,000 hours at the subdivision since the Nov. 10 explosion.

That number will rise until the investigation is finished.

Two people were killed in the explosion.

And no arrests have been made.

The city has ordered 33 homes in that subdivision to be demolished.