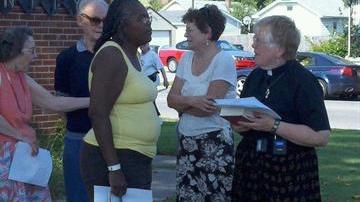 South Bend, IN - A prayer vigil was held for Steven Chatman, 19, of South Bend who was gunned down August 8th on the city's west side.

Chatman's sister and Godmother attended the vigil, his mother was unable to attend because of work.

"I don't even know if I can do this right now. There are no words other than he was a beautiful young man," Steven's Godmother Debra Greene said before the vigil.

Prayers were offered to Steven, the community and for the suspect who remains on the loose.

"Please forgive the person who did this but please send him to where he belongs," Greene prayed.

Others came forward in prayer as well, "We ask you to be with South Bend. There is too much killing," an unidentified man said.

Tuesday officials released a suspect in Chatman's murder, Demerius Shaw, 18. It's believed Shaw may be in South Bend or possibly Indianapolis, he is considered to be armed and very dangerous.