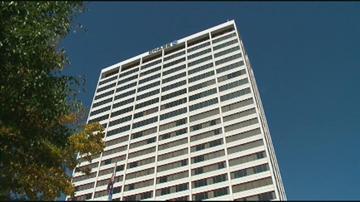 SOUTH BEND, Ind. – The most recent draft of a deal that would preserve the Chase Tower building’s place on South Bend’s skyline was filed Thursday.

The agreement names Satish Gabhawala as the investor seeking to purchase the building on behalf of Care Hotels.

The agreement has the city purchasing the building’s parking garage for $5.7 million. Below is a summary of the agreement:

Councilman David Varner says, these agreements show the city is trying to protect what would be a large investment. But he is concerned about how the mayor wants to pay the $5.7 million bill.

Currently, the money would come out of the City’s General Fund: Rainy Day Fund. It has about $8 million in it.

Varner would prefer to keep that money there, and pay for the deal through Tax Incremental Financing (TIF) funding. He says, the only way he will vote for the deal is if it’s funded through a TIF, and if he has that in writing.

Meanwhile, Common Council President Derek Dieter is outright opposed to the deal from the get go. Dieter says the City should not be bailing out buildings.

Dieter also takes exception for the sense of urgency the whole issue has developed. “For everybody to say, ‘we have to rush we have a deadline,’ I think that’s insulting to the council,” said Dieter.

Varner doesn’t like the seemingly rushed nature the issue has taken in recent weeks, but admits this is how the City has operated for years; putting council members in impossible positions and forcing last minute votes.

However the rush to get a decision cannot be placed solely at the feet of the current City Administration. Council Henry Davis, Jr. has been also been pushing to get the deal done in time.

According to Davis, if a deal is not approved on December 19, the investor’s rights to the loan will end. Davis says, at that time the original owner of the building may be able to file for bankruptcy and claim the Chase Tower as an asset.

Davis fears this would shut the building down for months, possibly up to a year or more. Davis is also concerned such an action would mean current tenants in the building would leave the downtown area; starting a chain reaction that would devastate the economy of South Bend.

The way Davis sees it, the $5.7 million purchase is an investment in the future of South Bend. It would insure the city maintains, if not increases, its tax revenues from property and payroll taxes.

He also says, the city loses more than $5.7 million if the building ends up being demolished, as he estimates it will cost around $7 million to knock it down if need be.

However some council members, including Varner, don’t think it would ever get that far.

And even if it did, Dieter is willing to take a chance and see what happens. “If [business leave downtown], that’s going to be bad, but again, like I said earlier, there’s plenty of office space in downtown South Bend,” said Dieter.

Dieter Says, if anyone should deal with this problem, he would prefer it be the next administration.

Not every member of the common council agrees though. “If we were to lose that building, we will become another dying city. We will be looked at as being like a Gary, Indiana and; I’m sure that we don’t want that type of a cloud hanging over our head,” said Davis.

Despite that, Dieter does not want to set a precedent. “What building comes next? What, does Michiana Square come and they say, ‘our elevators are bad, our parking’s not good, we want three million’? And it will never stop,” said Dieter.

Thursday, Davis was uncertain of what to expect at the special meeting on December 19, and says the vote could go either way.

Ultimately, the council members will make a big decision Monday. It is a decision all of them may be remembered for.