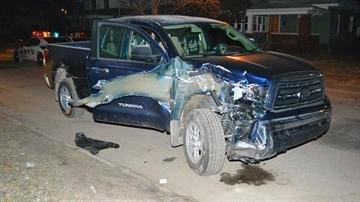 SOUTH BEND, Ind. – Residents in a Westside neighborhood are fed up with vehicles speeding, running stop signs, and damaging property on their street.

Sunday night, Lewis Hall, 45, from Walkerton was arrested on Diamond Avenue on suspicion of operating a vehicle while intoxicated. It was the second time in five years he was arrested for that infraction.

But before police took him into custody, witnesses say he drove his Toyota Tundra into a park Chevy Tahoe at full speed.

Reverend Greg Brown was standing on his porch when the accident happened.

According to Brown, Hall hit the truck then attempted to drive away. That’s when Brown jumped into his truck and followed him down the street.

The owner of the Tahoe was inside her home at the time of the accident and heard it happen. “We just heard a boom, and we both looked at each other and [we said] what was that?” said Tichanti Foster-Boone.

Tichanti and Brown caught up with Hall down about a block down the road, where he had pulled over.

Using their cars, the two blocked the damaged Tundra from being able to be driven away, and a few minutes later the police arrived.

Hit-and-run accidents on Diamond Avenue happen more often than Brown and his neighbors would like.

A lack of speed limit signs on the street is another issue residents have; as are people rolling through stop signs.

According to Reverend Brown, the people living on Diamond Avenue are complaining because the neighbors don’t want to see anyone get hurt. “People don’t stop; they come at high rates of speed; they damage our property and they leave the neighborhood and; we want something done,” said Brown.

An increased police presence or a monitoring device that would display a driver’s current speed and the limit, were suggestions for solutions offered up by residents.