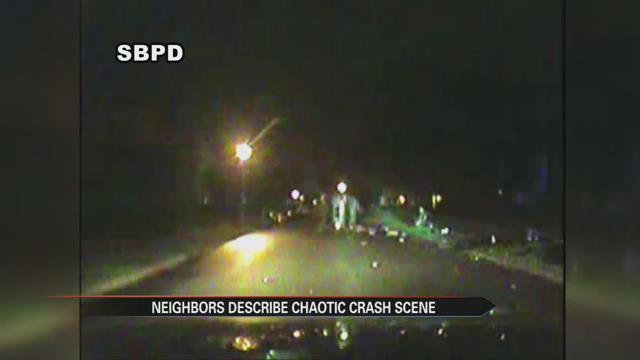 Two eight-year-olds were left with serious injuries after the man driving their SUV lost control in South Bend Wednesday. The quick thinking of neighbors along Wilber Street helped save their lives.

“I was in the living room with my wife watching TV, and then all the sudden, we heard noise coming from outside,” said one witness Adrian Reyna.

“It was like a car in a race hitting a wall, metal just scraping the ground. It was a terrible noise. Almost sounded like a bomb,” said another neighbor Colleen McNamara.

But it was a Mercury Mountaineer losing control and flipping over Wednesday night on the 1600 block of Wilber Street around 11 o’clock.

The crash seriously injured eight-year-old twins. A little boy was thrown from the SUV and landed right in Robert Betty’s driveway.

“The baby’s laying right there. You couldn’t even see him. There’s so much dirt and debris around him, you didn’t even know he was there,” said Robert Betty.

Neighbor Adrian Reyna, who was on the scene even before the cops, quickly realized how badly the boy was hurt.

“The cops wanted to wait for the ambulance. I pretty much told them you know just take him to the hospital now, you know there’s no time to waste,” said Reyna.

So they did. St. Joseph County Prosecutor Ken Cotter said the doctor told him if the cops hadn’t done that, the boy would be dead.

Meanwhile, his sister crawled out of the vehicle through a window.

“The girl didn’t have a shirt on. She had skid marks all over her back. Her skin was white,” said Reyna.

So he gave her the shirt right off his back.

“I see my kids in them kids,” said Reyna.

He says he feels connected to these kids now, so his family made them gift baskets that they’re praying they have the chance to give them.

The twins are both recovering in Riley Hospital in Indianapolis. The boy is in critical condition, and the girl is stable.